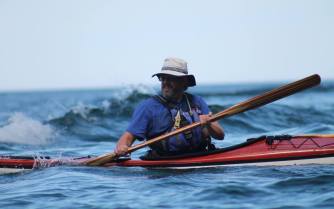 I have been paddling most of my life: when I was younger in canoes, but over time converting primarily to kayaks.  I have used canoes and kayaks for wilderness camping, including the Boundary Waters, Isle Royale, and Pukaskwa, as well as a way to see things that are only accessible by water.  I am equally proficient with either a Greenland paddle or a modern blade, but given the choice, I will be using a Greenland paddle, whether I am surfing, rock gardening or just cruising along.  As I became more proficient as a sea kayaker through classes from the BCU, ACA and the Great Lakes Sea Kayak Symposium, I thought it would be fun to return some of the knowledge that I had gained to other Great Lakes sea kayakers.  That lead me about 12 years ago to become an ACA certified instructor and then to get the ACA Traditional Skills teaching endorsement.  I spend almost all of my teaching time at kayak symposiums/events in the Great Lakes region, where I basically teach for food and a place to throw my tent.  I am currently a sea kayak guide in the Munising/Pictured Rocks area, and help to make sure that the company that I work for has well trained guides which provide safe trips on Lake Superior.

I have been paddling since I was about 7 or 8 years old.  The early years were in the family canoe, either being the motor for my dad as he fished, or on family canoe camping trips.  Sometime in my late 20’s I discovered sea kayaking while visiting Acadia National Park in Maine.  It was something I immediately liked and wanted to learn more about, so I got my own kayak.  From there I read books and attended my first GLSKS in 1995.  Don’t tell anyone, but I have spent a lot of time paddling alone.  Sometimes that is on camping trips, and sometimes it is just paddling among the icebergs on the local lake (Lake Superior).  There is something fascinating about ice, whether it is floating beside me or hanging on the cliff off to my side.  Much of the time kayaking is a means to go out and see things that not everyone can see and I get to do it quietly.  Kayak camping in the wilderness with a small group of friends is a great way to explore things.  It seems like I have been to so few places and there are so many more to visit and most places on my radar are just in the Great Lakes.

I first attended GLSKS in 1995.  I had been learning from books and knew something about navigation, rescues and safety.  At that time I didn’t know what I didn’t know.  It’s kind of overwhelming when one of the rescue classes at your first symposium is taught by Nigel Dennis, Stan Chladek, and Doug Van Doren (maybe there were others, I can’t remember).  Over the years since then, I attended GLSKS five times.  During those events I learned a lot and went on many cool GLSKS trips which, at the time, I would not attempt alone.  One year I took a BCU 4* training class before the symposium and the BCU coach from Britain who was teaching the course assessed me as a BCU 4* paddler during a GLSKS trip.  Another year, I was instructed by Greg Stamer who is a Greenland paddler and the founder of Qajaq USA.  That exposure led me to become a member of Qajaq USA and I have mentored Greenland strokes and rolling at Qajaq USA events for the past decade.  Those experiences ultimately lead me to become a sea kayak instructor and GLSKS is my favorite event, where I have been teaching for the past 12 years.  This year will start the fourth organization that I will have worked with at GLSKS.  Every year there are changes and improvements, but the symposium still always seems familiar with many old friends and familiar faces that I see once a year.