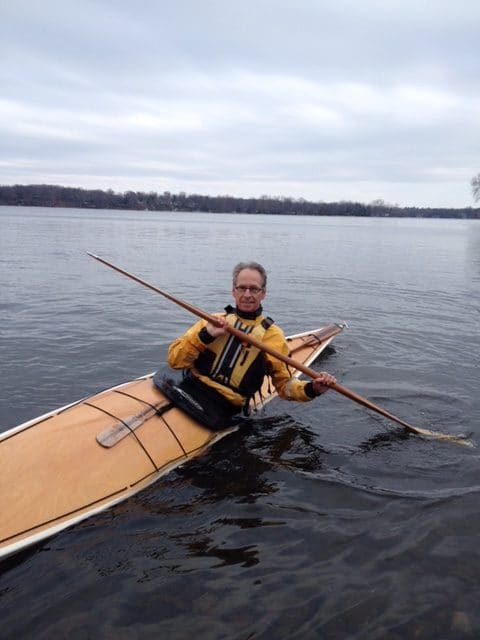 Doug Van Doren has been a practitioner of the “traditional” (Greenland Inuit influenced) style since he began paddling in the early 90’s. He is one of an early handful of North American paddlers to research and honor the traditional paddling style and equipment and to show its proficiency for paddling in any sea conditions. He has instructed and done rolling demonstrations throughout the U.S. as well as Canada, Wales, and at the International Sea Kayak Symposium in Llansa, Spain. Doug produced and is the on-air instructor for the teaching video, “Greenland Style” Kayaking: Instruction in Narrow-Blade Paddling Technique. He also was featured in Justine Curgenven’s video, This is the Sea Two.

Doug Van Doren (Reverend) is the long-time pastor of Plymouth United Church of Christ, a progressive, socially active congregation in Grand Rapids, Michigan. He has served on various national boards of his church denomination. He is active in the Grand Rapids community on various issues of justice and inclusion and has chaired and served on the board of several local agencies. Married to Colleen Mahon-Van Doren for 41 years, they have two sons, Camilo (deceased) and Aidan, age 20 who is also an accomplished sea kayaker.

I have been coming to GLSK Symposium since about 1993! This is the place where I began to see what sea kayaking is all about, from seeing slide presentations and interacting directly with many gifted and experienced coaches. Though I had hiked the Pictured Rocks as a teenager, it was at this symposium that I first saw them from the water (the only way to really see them, of course). Through the years at the GLSK Symposium I have worked with, and become friends with, some of the finest sea kayakers in the world. And I have seen people develop from beginner or intermediate paddlers to truly fine kayakers and many of them into great coaches. It is also in classes held just before the symposium that I did my BCU training and earned what was then, Senior Coach status. The people I have learned from, the contacts I have made, and the friendships I have developed at this symposium have not just enriched my kayaking ability, but my life as a whole.